Back to all posts

PLAYING CARDS WITH A PURPOSE 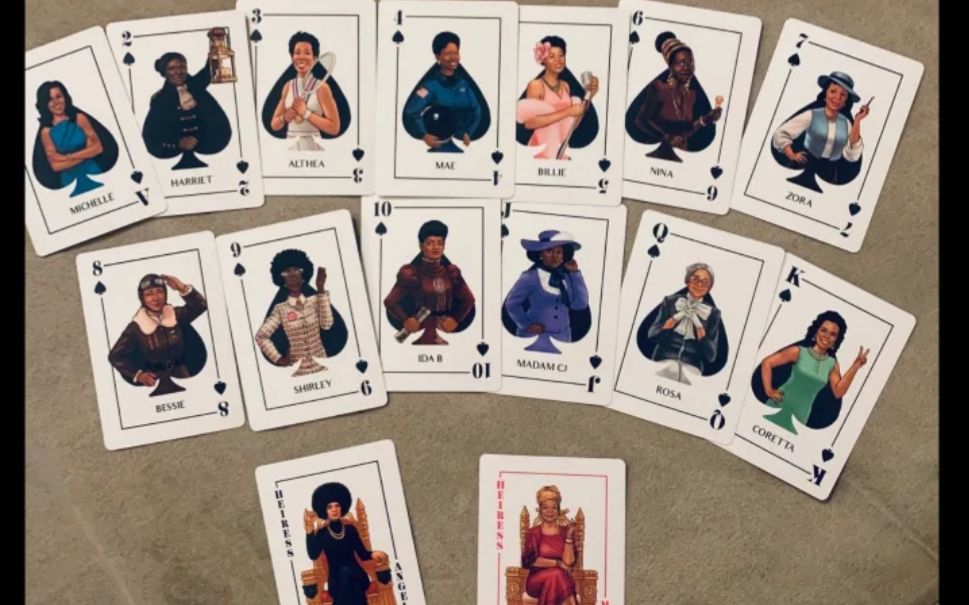 CULTURE My Black Ass Deck of Playing Cards Is Better and Blacker Than Yours (Unless You Also Own a Black Ass Deck, Too) Panama Jackson BLACK PLAYING CARDS I try to support black businesses as much as possible, and not just because some white brand fucks up. I buy my books from black-owned bookstores (for the most part; sometimes you can’t beat 50 percent off on a signed copy of a book that costs $34.99 at Barnes & Noble). If you’re a black-owned apparel company who makes dope shit, there’s a better than 90 percent chance that I will buy something from you. (I will not, however, support you just because the word “black” is on a T-shirt; I have my flyness to concern myself with.) So it was with great pleasure and excitement the other day when I was scrolling through my Instagram feed and saw a post from The Heiritage, a company formed by two black women who graduated from Massachusetts Institute of Technology, Tiffany Mickel and Shawna Davis, who’d created and styled a whole ass, black ass deck of playing cards, where each card, including what would be the Jokers, features a different awesome black woman, both contemporary and of the past. Outstream Video   Like who? Glad you asked. When playing Spades, on what would be the big and little joker, there are photos of Angela Davis and Maya Angelou. Argue amongst yourselves about who gets to be the Big Joker. My money is on Davis, who is rocking all black everything and has an afro and black fist raised on the card. The Ace is Michelle Obama, and the cards, deuce (two) through king respectively are: Harriet Tubman, Althea Gibson, Mae Jemison, Billie Holiday, Nina Simone, Zora Neale Hurston, Bessie Coleman, Shirley Chisolm, Ida B. Wells, Madam C.J. Walker, Rosa Parks and, of course, Coretta Scott King on the king. Each woman appears on the corresponding card in each suit, and each woman is on a card in which her numerical placement corresponds with some fact about her life. ADVERTISEMENT For instance, Nina Simone is on the six card because “It was on her sixth live album Nina Simone in Concert that “Mississippi Goddam” was debuted to the world.” Madam C. J. Walker is on the jack because she is “A Jack-of-all-trades, Madam C.J. Walker affirmed that “There is no royal flower-strewn path to success … for if I have accomplished anything in life it is because I have been willing to work hard.”’ You can read about each woman on their website. I was so hyped and excited to see this creation, I bought three decks. It is also one of those ideas that as soon as you see it you say to yourself, “Dammit, self, how come YOU never thought to do this?!” But I’m glad they did. Because from here on out, when I’m playing Spades and bustin’ niggas asses and putting on clinics on how to properly slap a card for maximum spin on the table, I will be doing so with a deck full of black women (and eventually men—that’s in the works, I might mix and match my decks) so even though you got your ass ran off the table, Angela Davis helped me do it, so you can’t be mad. Unless I slap you with Michelle Obama or Harriet Tubman (playing Joker-Joker-Deuce-Deuce, house rules, ya know), in which case it probably doesn’t matter who is on the card, there will be furniture movin’. ADVERTISEMENT So if you’re like me and love to support black businesses but also would like to play Spades with some ancestors and some folks still kickin’ who done did some big ting tings, here’s a deck of playing cards for you. I keep a deck of cards (and Uno cards) on me at almost all times, but always in my car, just in case somebody wants to play Spades or lose money in Tonk (or Tunk, I don’t know which is the right way to spell that.) The fact that I can now do that with blackness warms my soul. It lets my soul glo and shine through. Ain’t nothin’ like a little heiritage ... see what I did there? I’ll see myself out. Have a black one. SHARE THIS STORY https://verysmartbrothas.theroot.com/my-black-ass-deck-of-playing-cards-is-better-and-blacke-1833324233 GAMES STORIES The 10 Best Games for Black Families to Play During the Holidays Black Card Revocation Commission: An Inquiry About Dominoes Hi. I'm A Writer. And I Suck at Scrabble. ABOUT THE AUTHOR Panama Jackson Panama Jackson is the Senior Editor of Very Smart Brothas. He's pretty fly for a light guy. You can find him at your mama's mama's house drinking all her brown liquors. TwitterPosts Discussion Community (4)Pending Reply Sort by: Popular Bob ColePanama Jackson 3/15/19 2:50pm https://www.amazon.com/HeroDecks-Trump-Presidential-Playing-Cards/dp/1934600326 Sorry, I could not resist. Reply CypressBob Cole 3/16/19 8:40am You should have tried harder. 6 Reply The Ja Rule of KinjaPanama Jackson 3/15/19 2:48pm Not gonna fight you on which is blacker because we all win I think. But I do really like mine. I actually replaced all the decks of cards in my house with these.  https://www.theblackpack.co/thecards 4 Reply Shivaya NamahPanama Jackson 3/17/19 7:49am I thought this was gonna be some nonsense hype about stupid shit. I was wrong. This is fucking cool as hell.